The Rise And Fall Of Darktrace: Why Has One Of 2021’s Biggest IPO Success Stories Shed Almost 40% Of Its Value In Six-Weeks

What a difference six months can make. When cybersecurity unicorn Darktrace debuted on the London Stock Exchange on April 30th 2021, it took one week for Wired to claim that the listing ‘salvaged London’s tech IPO dream’.

What a difference six months can make. When cybersecurity unicorn Darktrace debuted on the London Stock Exchange on April 30th 2021, it took one week for Wired to claim that the listing ‘salvaged London’s tech IPO dream’. However, six months later, the stock has strayed nearly 40% from its peak price of £9.85 and uncertainty reigns over the future of the company as analysts warn against promises that are yet to be delivered.

Darktrace had enjoyed an enthralling start to public life as the stock climbed an impressive 198% between its launch and the 23rd of September – but shares began to tumble as the investor lock-up period ended and the company drew criticism over the quality of the product it was offering. 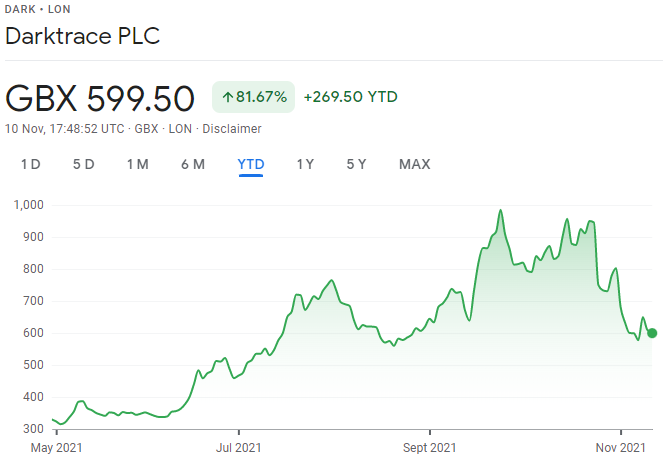 As the chart above shows, Darktrace had enjoyed a summer of accumulation before an abrupt downturn that’s seen the stock fall dramatically. Although it’s worth acknowledging that DARK remains well above its listing price in the spring of 2021, widespread uncertainty has impacted the future prospects of the asset.

So how has such a significant drop in the value of Darktrace stock happened? Let’s take a deeper look at one of the rise and fall of the promising cybersecurity unicorn, Darktrace:

Shares in Darktrace had taken a significant hit after a broker claimed that the cybersecurity firm’s AI framework was only worth half of its closing value of £6.6 billion at the time.

Peel Hunt analysts including Oyvind Bjerke claimed that some experts that they had consulted determined Darktrace’s cybersecurity solutions to be a ‘gimmick,’ whilst acknowledging that other professionals believed that the service offered protection from serious online attacks. As a result of the findings, shares in the stock fell as deeply as 27% – representing Darktrace’s biggest downturn since the stock’s LSE debut.

Astonishingly, the analysts opted to deliver a sell rating for the stock alongside a price target of £4.73 – a value that implies a 50% downside from the stocks most recent close at the time. Citing “the potential market size, the intensifying competition, and Darktrace’s limited R&D spend,” the analysis into Darktrace determined that its product was insufficient to command such a lofty market price.

Darktrace hit back in against the report, with a spokesperson responding by email that the company’s AI-based services “protects organisations against cyber-attacks across the full breadth of digital environments.” The email also added that the company’s customer satisfaction across its 5,900 customers is “industry-leading.”

The news of Darktrace’s hit from Peel Hunt came at a difficult time as the stock’s 180-day lock on investors selling the stock expired in early November. The share price fall amounted to the largest across the FTSE 100.

Significantly, the end of the lock-up period enabled a wide range of investors to sell their shares in the company – including Mike Lynch, Darktrace’s first and largest shareholder prior to the company’s floatation, who initially sold the software group Autonomy to Hewlett-Packard for £8.4 billion in 2011.

Significantly, the prospect of Lynch’s £895 million worth of shares being cashed in led to widespread investor concerns and the tumbling DARK market capitalisation.

It’s worth noting that Darktrace’s difficulties across the cybersecurity market are largely isolated and that the wider industry is undergoing something of a boom period. As the Covid-19 pandemic has forced companies to undergo significant digital transformation, cybersecurity solutions have become increasingly sought after – whilst stocks have generally enjoyed periods of drastic growth.

Maxim Manturov, head of investment research at Freedom Finance Europe, has pointed to CrowdStrike (NASDAQ:CRWD) as an example of a stock that’s enjoyed significant growth in the months that followed its debut in mid-2019.

“The company has been in a steady uptrend since March 2020 and does not seem to be slowing down,” Manturov explained. “Of course, September was a tough month for the markets, but this could provide a buying opportunity. CRWD shares are currently about 10% below the high of $289.2 reached at the end of August. The strong sentiment for CRWD stock is supported by solid fundamentals.”

“In the company’s record second quarter, the annual revenue rose by 70% year-on-year to $1.34 billion. Of this amount, $150.6 million was added to the regular revenue for the quarter. The total revenue also increased by 70% compared to the same period a year ago, reaching $337.7 billion. Partly, the investment world is increasingly interested in CRWD shares because this growth is not expected to slow down,” Manturov added. 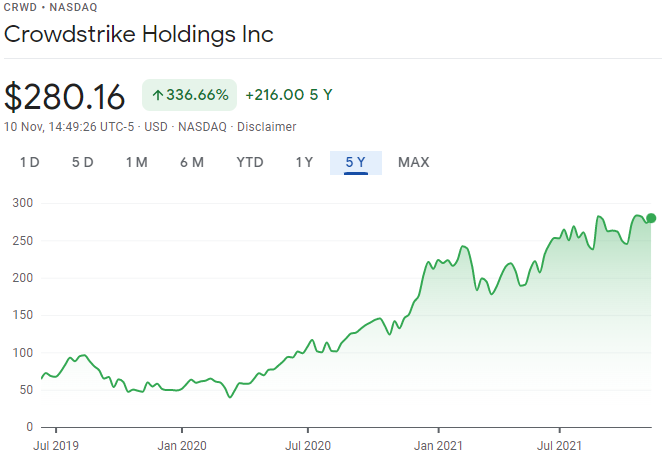 As the chart above illustrates, CRWD shares have grown some 336.66% in value since CrowdStrike’s debut two years ago, with sustained growth occurring from around the time of the emergence of the pandemic with little sign of slowing down.

Although Darktrace is facing significant challenges on its road to emulate CrowdStrike’s exponential growth, there’s still plenty of potential for the company to recapture its Q2 2021 form – however, the cybersecurity firm will face a battle to prove the worth of its suite of AI products.

By Benzinga Newsdesk
NexImmune (NASDAQ:NEXI) reported quarterly losses of $(0.65) per share which missed the analyst consensus estimate of $(0.64) by 1.56 percent.