The 2021 Nascar season has featured a car with the Dogecoin logo of a Shiba Inu in several races. A Voyager-sponsored car has also featured the names of several cryptocurrencies on the car.

The 2021 Nascar season has featured a car with the Dogecoin logo of a Shiba Inu in several races.

A Voyager-sponsored car has also featured the names of several cryptocurrencies on the car.

Could a car with the popular Shiba Inu coin be the next crypto-themed Nascar?

What Happened: Shiba Inu coin (CRYPTO: SHIB) could be featured on a Nascar car driven by Landon Cassill if owners of the coin can convince Stephen Ehrlich.

Let’s go #ShibaArmy as we are happy to put the logo on the car but show us how much you want it by opening accounts with @investvoyager @landoncassill is happy to do it!!! https://t.co/dKQ2hy7pBy

The driver is being paid via a portfolio of cryptocurrency that includes Bitcoin (CRYPTO: BTC) and Litecoin (CRYPTO: LTC). Casill and the car are being sponsored by Voyager Digital for 19 races.

Why It’s Important: Ehrlich’s response has sent off a frenzy of Shiba Inu fans and coin holders to open Voyager accounts, post screenshots on Twitter, and leave reviews of the cryptocurrency trading platform’s app.

The Dogecar driven by Stefan Parsons got a ton of publicity for Dogecoin (CRYPTO: DOGE), one of the most popular cryptocurrencies at the time.

The car crashed at the recent Tennessee Lottery 250 race, which also led to some memes and posts about the price of Dogecoin falling after the crash.

A race featuring a Dogecoin car and Shiba Inu coin car could be must-see television for cryptocurrency fans and traders.

A racecar featuring the Shiba Inu logo could also turn into a merchandising effort similar to the Dogecar.

Related Link: Doge Car Returns To Nascar: How To Get Merchandise And Bet On The Car To Win

By Benzinga Newsdesk
Ford Motor (NYSE:F) reported quarterly sales of $35.70 billion which beat the analyst consensus estimate of $32.54 billion by 9.71 percent. This is a 2.86 percent increase over sales of $34.71 billion the same period

By Benzinga Newsdesk
JP Morgan analyst Robbie Marcus maintains Baxter Intl (NYSE:BAX) with a Overweight and lowers the price target from $90 to $78. 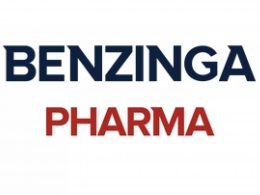 By Benzinga Newsdesk
NexImmune, Inc. (NASDAQ:NEXI), a clinical-stage biotechnology company developing a novel approach to immunotherapy designed to orchestrate a targeted immune response by directing the function of antigen-specific T