Study achieved key objectives for safety, efficacy and pharmacokinetics After completion of the study, all patients enrolled in an extension study Treatment with PRX-102 provided coverage for the entire four‑week period

Study achieved key objectives for safety, efficacy and pharmacokinetics
After completion of the study, all patients enrolled in an extension study
Treatment with PRX-102 provided coverage for the entire fourâ€‘week period between infusions
No patients developed treatment-induced anti-drug antibodies to PRX-102

“We are excited to share the final data from the BRIGHT study, an important milestone in the progress of our PRX-102 clinical program,” said Dror Bashan, Protalix’s President and Chief Executive Officer. “The availability of this data for review by the U.S. Food and Drug Administration, the European Medicines Agency and other regulators is another step forward towards the anticipated approval of PRX-102 as a potential good alternative for adult Fabry patients in both the regular 1 mgkg every two weeks as well as the 2 mgkg every four weeks regimen.”

PRX-102 is a plant cell-expressed recombinant, PEGylated, cross-linked αâ€‘galactosidaseâ€‘A product candidate. The BRIGHT Phase III clinical trial (NCT03180840) was a multicenter, multinational open-label, switch-over study designed to evaluate the safety, efficacy and pharmacokinetics of treatment with 2 mg/kg of PRX-102 administered every four weeks for 52 weeks (a total of 14 infusions). The study enrolled 30 adult patients with Fabry disease (24 males and 6 females) with mean (SD) age of 40.5 (11.3) years, ranging from 19 to 58 years, who previously received an approved enzyme replacement therapy (ERT) for at least three years on a stable dose administered every two weeks (agalsidase alfa – Replagal® or agalsidase beta – Fabrazyme®). The most common Fabry disease symptoms at baseline were acroparesthesia, heat intolerance, angiokeratomas and hypohydrosis.

All patients who participated in the study received at least one dose of PRX-102, and 29 patients completed the study. Of these 29 patients, 28 received the intended regimen of 2 mg/kg of PRX-102 every four weeks throughout the entire study, while one patient was switched to 1 mg/kg of PRX-102 every two weeks per protocol at the 11th infusion. One patient withdrew from the study after the first infusion due to a traffic accident.

First infusions of PRX-102 were administered under controlled conditions at the investigational site. Based on pre-specified criteria in the study protocol, patients were able to receive their PRX-102 infusions at a home care setup once the Investigator and Sponsor Medical Monitor agreed that it was safe to do so.

Overall, 33 of 182 total treatment-emergent adverse events (TEAEs) reported in nine (30.0%) patients were considered treatment-related; all were mild or moderate in severity and the majority were resolved at the end of the study. There were no serious or severe treatment-related TEAEs and no TEAEs led to death or study withdrawal. Of the treatment-related TEAEs, 27 were infusion-related reactions (IRRs) and the remainder were single events of diarrhea, erythema, fatigue, influenza-like illness, increased urine protein/creatinine ratio, and urine positive for white blood cells. The 27 IRRs were reported in five (16.7%) patients, all male. All IRRs occurred during the infusion or within two hours post-infusion; no events were recorded between two and 24 hours post-infusion. None of the patients without anti-drug antibodies (ADAs) at screening developed treatment-induced ADAs following the switch to PRX-102 treatment.

“We are pleased to announce final results from the BRIGHT Phase III clinical trial and would like to thank the study investigators, Fabry disease patients, and their families who dedicated their time and efforts to this significant research,” said Giacomo Chiesi, head of Chiesi Global Rare Diseases. “Based on these data and additional clinical studies, we believe PRX-102 may be an important new treatment option for patients who are currently receiving ERT infusions every two weeks, and we look forward to advancing our work around the world to obtain regulatory approvals as quickly as possible and provide access to the Fabry disease community.”

Additional long-term data is being collected as part of an extension study (NCT03614234). The companies intend to present final data from the BRIGHT Phase III clinical trial at one or more medical conferences.

‘Today, Coinbase filed an application with the NFA to register as an FCM → Futures Commission Merchant. This is the next step to broaden our offerings and offer futures and derivatives trading on our platforms…’ -Tweet From Coinbase’

By Benzinga Newsdesk
MKM Partners analyst Eric Handler upgrades Mattel (NASDAQ:MAT) from Neutral to Buy and raises the price target from $24 to $30. 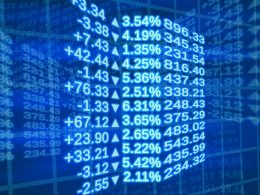 By Benzinga Insights
Cameco (NYSE:CCJ) has outperformed the market over the past 20 years by 2.22% on an annualized basis producing an average annual return of 9.42%. Currently, Cameco has a market capitalization of $11.54 billion.