German automaker BMW (OTC: BMWYY) has started production at a new $2.24 billion electric vehicle plant in Shenyang, China, as it looks to take on Tesla Inc (NASDAQ: TSLA) an

German automaker BMW (OTC:BMWYY) has started production at a new $2.24 billion electric vehicle plant in Shenyang, China, as it looks to take on Tesla Inc (NASDAQ: TSLA) and other fast-growing local EV rivals.

What Happened: The company confirmed on Thursday that its third car assembly factory in China, Lydia, was up and running to lift its annual output in the country to 830,000 this year from 70,000 in 2021.

“The expansion of our production footprint in China shows we are preparing for further growth in the world’s largest electric car market and are confident in China’s long-term perspectives,” said Jochen Goller, President & CEO of the BMW Group Region China.

“We are stepping up our e-mobility efforts, aiming for more than a quarter of our sales in China to be all-electric by 2025.”

Why It Matters: China is a key market for legacy players including Volkswagen Group (OTC: VWAGY) who are looking to take on EV leader Tesla as well as Chinese players such as Warren Buffett-backed BYD Co (OTC: BYDDY), Nio Inc (NYSE:NIO).

BMW aims to lower carbon emissions through a vehicle’s life cycle by 40% by 2030 compared to 2019, which includes an 80% carbon reduction at the production level.

BMW said it began production of its new i3, an all-electric midsize sports sedan for China, in May. The $52,000 car competes with the Tesla Model 3. The German automaker aims to have 13 electric models on sale in the Chinese market by next year.

By Benzinga Newsdesk
Keybanc analyst Josh Beck maintains Block (NYSE:SQ) with a Overweight and lowers the price target from $225 to $175.

By Benzinga Insights
Thomas Carter, President And COO at Nexstar Media Group (NASDAQ:NXST), made a large buy and sell of company shares on September 28, according to a new SEC filing. 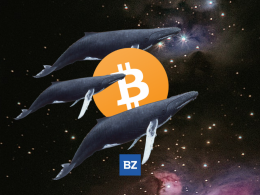 Anonymous Crypto Wallet Moves $79M Worth Of Bitcoin Onto Coinbase

By Benzinga Insights
What happened: An anonymous cryptocurrency wallet holding $79,261,873 of Bitcoin (CRYPTO: BTC) just transferred their funds onto Coinbase. The bitcoin wallet address tied to this transfer has been identified as: bc1qpkw9m9uzep2tk34dgrn74j6lnmzwp6vr7nh67r